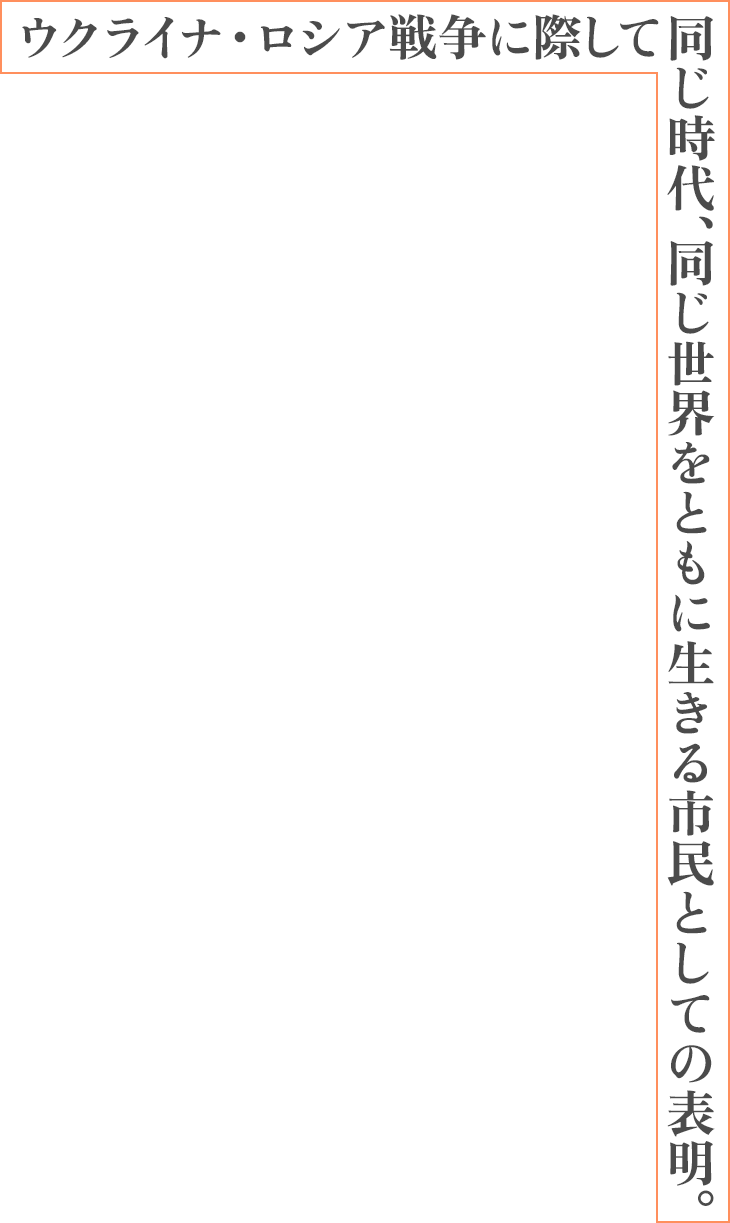 Let's use our voices to end the cycle of violence. It is people who have gone beyond their own nationality – people who understand themselves to be world citizens – who can make this happen.

As citizens of the world, we express our solidarity with the citizens of Ukraine, Russia, and the world who are working tirelessly to restore peace.

We believe that the voices of people who see themselves as citizens of this world, who have gone beyond nationality, have the power to defuse the violence often created by nations and political powers and transform it into peace.

Faced with the enormous power of nations, it may seem as if individual citizens are powerless to make a difference.

But from painful experiences of war in the past, we have learned. We now know what happens when someone adds their voice to the chorus of other voices speaking out about the futility of war, the irrationality of violence, and the preciousness of peace: we now know that one by one, whenever we join others in speaking up to our families, friends, and to society, these efforts together have helped reduce violence and sow the seeds of peace.

It is precisely because we are living in an age in which we are all connected, that each of us can transcend national boundaries and work together to make the world better. We can become a force to break the cycle of violence created by nations and political powers, and turn it into a cycle of peace.

The 'voice' doesn't have to be loud; it doesn't even have to be spoken aloud.

On the Russian subway, a Russian grandmother dressed in blue and yellow, the colors of the Ukrainian flag, silently expressing her will for peace.
Far away in distant Japan, young people are donating money, designating it to support those who have been harmed, rather than for military force.

showing your support by pressing 'like'
or taking the time to listen and feel into your own inner conflict
it might be holding a dialogue
or praying
or sending a donation...
–each one of these is an important 'voice.'

In order to transform the cycle of violence that is still occurring in various parts of the world to a path of peace, we are connecting beyond the boundaries of nations and walking together. We stand with those who are speaking out for peace in Ukraine and Russia, and commit to make our voices heard.

We also urge our government to make every effort to find a peaceful solution.

We will also continue to urge the government to take steps to ensure that the people of Ukrainian and Russian origin living here within the borders of our nation can live safely without persecution as a result of these events.

for English readers This message was originally addressed to the people of Japan. Now we are inviting anyone who resonates with the call to make their 'voice' heard, through words or actions, to be a catalyst for positive change in the world.

Ways you can use your voice

Number of Individuals/Organizations
that have endorsed this initiative:

In order of endorsement (as of June 20)

NPOs/NGOs in Japan that support Ukraine